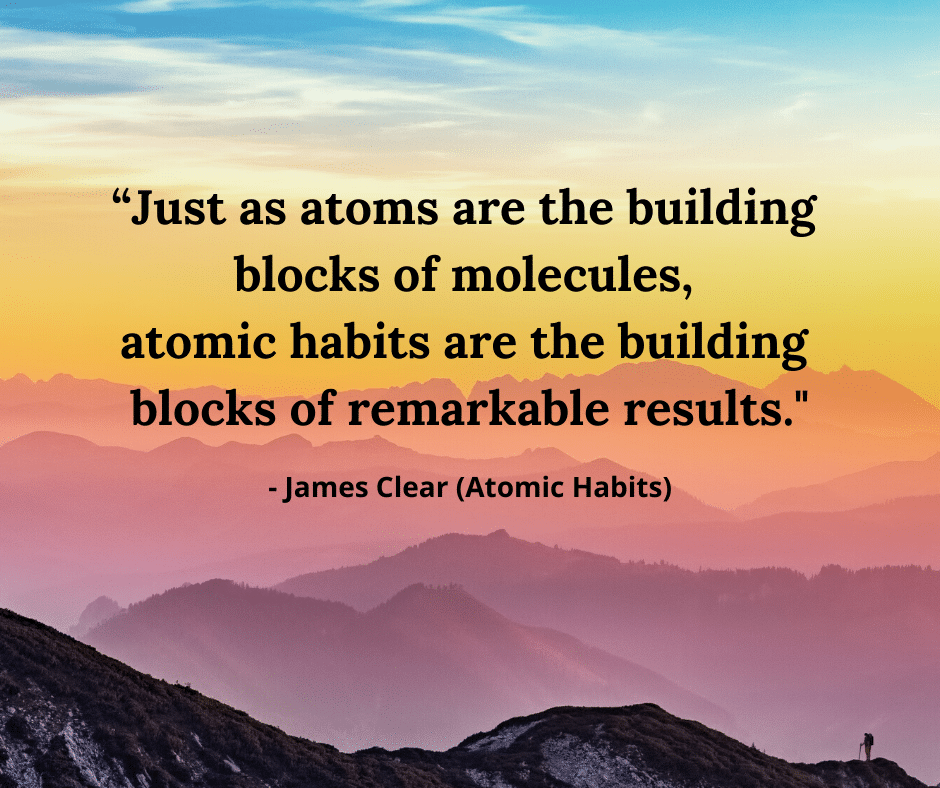 Atomic Habits by James Clear rocketed to the New York Times bestseller list when it was released, and for good reason – it’s one of the best, most practical books on the topic of creating positive personal changes that produce real results.

Clear begins with the basic premise that when it comes to creating results, systems (or consistent actions) are more important than having a defined goal. Think about it. As he points out, plenty of people write down their goals, but fail to reach them. For example, how many high school athletes set a goal of playing at the pro level or being in the Olympics, yet don’t make it? And how many bright-eyed entrepreneurs know exactly what level of financial success they wish to attain, but wind up out of business within a few months or years? Simply having a clear vision isn’t enough. It’s a necessary step and provides direction, but despite what many “success gurus” claim, the act of writing down your goal or creating a vision board doesn’t guarantee your success.

What separates those who are successful from those who fall short are the consistent actions they take – their systems, or to put it another way, their habits.

The lives we’re currently living, the results we’re getting right now, are the compound effect of our habits over time. The occasional heroic effort – the crash diet, the week in the gym, the seasonal organizing frenzy – doesn’t make much of a difference and won’t create permanent changes in our lives. Lasting change requires us to change our underlying habits, to consistently take more effective actions.

Sounds hard. But it doesn’t have to be, not if you understand how habits are formed, and harness the power of making behavior changes in the form of non-intimidating micro-habits, which accumulate to create bigger, more powerful shifts in the trajectory of our results.

“Making a choice that is 1 percent better or 1 percent worse seems insignificant in the moment, but over the span of moments that make up a lifetime the choices determine the difference between who you are and who you could be.”

There are four essential steps that go into establishing a habit: cue, craving, response, and reward. Each of these steps can be intentionally manipulated to help us create an empowering new habit, or eliminate a bad one. Clear spends the majority of the book describing strategies to build better habits, based on his “Four Laws of Behavior Change”:

The strategies he describes to hack the habit formation process are all pretty simple and easy to put into practice. A few examples:

My favorite suggestion, not surprisingly, is Clear’s “Two-Minute Rule”: When you start a new habit, it should take less than two minutes to do. This idea is also at the core of kaizen: making changes so small they slip right under the brain’s fear and resistance radar (see “Using Kaizen to Sneak Past You Brain’s Fear Radar“).

“People often think it’s weird to get hyped up about reading one page or meditating for one minute or making one sales call. But the point is not to do one thing. The point is to master the habit of showing up. The truth is, a habit must be established before it can be improved.”

The best part of Atomic Habits is that you can pick and choose different strategies from this toolkit for different habits you want to work on, depending on the situation. For some new behaviors I’ve modified my environment – for example, keeping a notebook and pen next to my bed to develop the habit of working on a writing project every evening – while for others, implementation intentions seem to work best (such as planning my workout schedule for the upcoming week, committing to specific classes on specific days). I’ve also found that hanging a habit tracker checklist on my fridge keeps me accountable and also adds a little extra motivation to fill in the boxes each day.

Clear finishes up with several chapters designed to help you find your ‘zone of genius’ and stay motivated for the long run. After all, unless you study behavior change and habit formation for fun and profit, the whole point of changing your actions is to create a new and better life.

“The key is to direct your effort toward areas that both excite you and match your natural skills, to align your ambition with your ability.”

One of my favorite parts of Atomic Habits comes at the beginning, when Clear explains why it can take so long to see results when you change your behavior. New results require you to break through the ‘Plateau of Latent Potential’, a state where all of your small daily efforts are accumulating below the surface until finally one day the external change suddenly just happens. It looks like it was that last step that caused the breakthrough, but in reality it required every incremental step that came before. None of the work was wasted. I struggle with patience, and the image of ice needing to be warmed to 32 degrees Fahrenheit before any change becomes visible has helped me stick with many a new habit when I didn’t see the results I wanted quickly enough.

What I loved about this book is that Clear writes in an easy-to-read, conversational style. His enthusiasm for the topic comes through on every page, and it’s not a stuffy, academic tome that loads the reader down with lots of facts and studies. None of the material is new or ground-breaking, but the way he explains things gave me a new perspective and had me thinking “Wow, I never thought of it that way before!” on nearly every page. He’s done his homework, and he sprinkles in the science, but his passion comes from personal experience.

Clear’s belief in the power of habits comes from his own struggles, from rebuilding his life mini-habit by mini-habit while recovering from a major traumatic brain injury (he was hit in the face with a bat during a high school baseball game). For those who question the difference small steps and stacking micro-habits can make, he’s living proof of the dramatic and lasting transformation they can create.

This book has earned a special spot on my keeper shelf – it’s one I refer back to again and again. If you’re ready to make some changes and set your life on a new course, I highly recommend it – reading Atomic Habits will give you the tools to build your own personalized system for success.

15 thoughts on “Library of Excellence: Atomic Habits by James Clear”