Using Kaizen to Sneak Past Your Brain’s Fear Radar 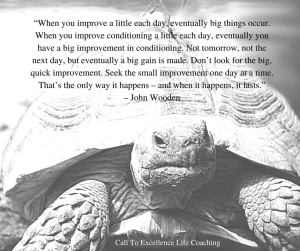 I used to spend a lot of time on my couch. Deep down, I really wanted to get into better shape. I secretly envied the buff, toned models in fitness magazines, and wished I could be more like the disciplined, athletic people I knew. You know, those people, the ones who get up and run 5 miles before they go to work…  the ones who stick with their exercise routines even when they travel…. the ones who are as comfortable in a gym as I was on my couch.

Unfortunately, my attempts to get into better shape consisted of occasional forays into the gym, once or twice a year, when something got me fired up. But the spark flickered out pretty quickly, sometimes after only one or two visits, sometimes after a few weeks. For me, the gym was an intimidating, scary place. All those machines I didn’t know how to use. Muscle-bound jocks who brought back bad memories of middle school gym class. As for running outside, well, unless the weather was sunny and 72 degrees with a gentle breeze, it was uncomfortable and ended with me wheezing and tired and sore.

It didn’t take much to convince me the couch was a much better option.

It seemed like I was destined for a flabby future… until I read a book called “One Small Step Can Change Your Life – The Kaizen Way” by Robert Maurer, PhD. And that book did indeed change my life.

Kaizen is a Japanese word that describes an approach to change that involves small, incremental adjustments. The concept actually originated in the US during World War II, when a statistician named Dr. W. Edwards Deming introduced it as a strategy to increase factory production of military supplies, by making continual small improvements in quality and quantity, because there wasn’t time for large-scale innovations like building new manufacturing plants. After the war ended, we exported the concept to Japan to help with rebuilding their economy, and they made it their own and gave it a mystical-sounding name. Remember how Japan dominated the world in the production of quality cars and electronics in the 70’s and 80’s? That was largely the result of applying kaizen in the business arena. It’s powerful stuff.

Now, you may be wondering what tanks and reliable cars have to do with you losing weight or getting organized or being a better parent or building your business or becoming the next American Idol.

It’s all about the power of those small changes.

Applying kaizen to transform your life is all about finding a small step you can consistently take in the direction of the change you want, a step so small it sneaks under the radar of the brain’s change watchdog, the amygdala, without setting off any alarms. Sometimes this step is so teeny-tiny that to your rational mind it seems ridiculous. Something like walking up one flight of stairs, or throwing away one bite of your afternoon snack, or filing one paper a day where it belongs. If your reaction to the step is that it’s so small it’s idiotic, you’re on the right track. When the action is that tiny, the amygdala can’t put up any resistance – there is absolutely no excuse not to do it. If you can muster up even the smallest level of commitment to change in that area of your life, you cannot fail to perform that step regularly.

And that’s the secret. When you take that action consistently, on a daily basis, something magical starts to happen. Your brain sees there is nothing to be scared of, and it starts to form new neural connections that associate good feelings with the change. It starts to want more. And eventually larger changes begin to happen almost effortlessly.

Examples of Kaizen in Action

One of the stories Dr. Maurer tells is about a woman he worked with who was experiencing all kinds of health problems that would be helped by exercise, but her life was too jam-packed to fit in sessions at the gym, even if she were so inclined, which she wasn’t. He knew the doctor’s standard prescription of ‘get some exercise’ would be met by resistance and anger and frustration, nothing would change, and her health would continue to deteriorate.

So Maurer tried something drastically different. He suggested she walk in place for one minute each evening.

But it worked. It was something she was able to do. And that made her feel good. It built her success muscle. At her next visit she was eager to add more minutes, and within a few months she was enthusiastically taking aerobic classes.

Because that easy one-minute a day routine rewired her brain.

After I read this story, I decided to try something similar to reform my couch-potato ways. I decided I would start using the coat rack – I mean stair-stepper – that was taking up space in my living room for 30 seconds every evening during a commercial break. After that became ridiculously easy, I moved up to one minute, and then two. Somewhere along the line, I signed up for a running group and trained for a 5K.

After staying at that level for several years, with some occasional classes at the gym, I decided to tackle a half-marathon, and eventually ran three before retiring from that distance. Now, the habit of running 3-4 days a week, and taking some sort of strength training class at the gym is so ingrained I can’t imagine life without it. And it all started with 30 seconds a day on a stair-stepper.

And just so you don’t think kaizen only works for exercise goals, I also used kaizen to declutter my home by getting rid of one piece of junk a day, and now I’m organizing my space in 5 minutes a day.

Basic Principles for Using Kaizen in Your Life

Determine the area of your life that you want to change, and identify one tiny step in the desired direction.

Small and easy is the key here. You want to pick something that is so easy that you’ll have no problem following through every single day (or on every occasion when it is appropriate). Ideally, it should be something that takes one minute or less. No matter how busy you are, you can find one minute a day for something that is important to you.

A few ideas to get you thinking:

If you encounter resistance and can’t stick with your initial kaizen action, the change is probably still too big.

Try something even smaller. The secret is consistency. You’ll get better results with 30 seconds of exercise every day than with five minutes once a week. It’s not about the cumulative quantity of time, it’s about creating new neural pathways by performing the action every day.

Don’t try to expand the size or scope of the commitment too quickly.

Stick with the first tiny step until the next step up seems ridiculously easy too. It can take weeks or months to start to change the pathways in the brain, so don’t rush. Move up when it feels natural and enjoyable to do so. If your consistency starts to slip when you take on a bigger step, go right back to the level where you were performing the action regularly.

And remember, your commitment to a specific action doesn’t mean you can’t do more. If you commit to walking up one flight of stairs at work, and you feel like walking around the block when you get home, that’s fine, go for it – but remind yourself that the only non-negotiable commitment every day is that one flight of stairs. Anything else is optional, icing on the cake.

It seems ridiculously simple and slow, especially in a world where the gurus tell us to think BIG BIG BIG and FAST FAST FAST.

(Seriously, right before New Year’s I saw an offer from one of these guys about how I could become rich and successful, anything I wanted, in just a few months. I’m not saying it can’t happen, but just reading the email exhausted me. My amygdala wanted no part of whatever the actual program would involve.)