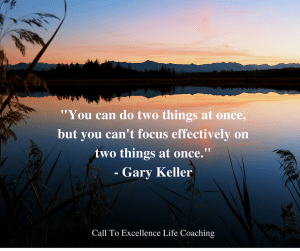 When your to-do list is overflowing, the idea of knocking out several things at the same time sounds really appealing, right? It seems like it should be the most efficient way to use our limited time.  I know I fall for this argument regularly. In college I used to study while I was watching TV, and now I do everything from paying bills to journaling to reading magazines during my TV time. I’ve been known to fold laundry and load the dishwasher while I’m on conference calls or listening to online classes. And I’ve used my time at conferences to declutter the emails in my inbox.

Well, it depends on what the goal is. If the goal is simply to cross things off the to-do list, then yes, this approach can sometimes be a faster way to check off items – but not always. As we’ll see below, ‘multitasking’ can actually slow us down, making things take longer than if we had worked on them sequentially. And if the goal is excellence, which requires our fully focused attention, doing more than one thing at a time will keep us stuck in the rut of mediocrity.

That’s because the concept of ‘multitasking‘ is actually a myth.

The term originated with computers, when they first developed one that could run multiple programs at once. But even in that context, multitasking didn’t mean what we’ve come to believe it means. When a computer runs multiple programs, it seems simultaneous to us, but in reality the computer is switching back and forth between programs so rapidly that we can’t detect it with our senses.

Cognitive science shows that the same thing happens in our brains when we try to ‘multitask’. However, while the switches in a computer are undetectable, when we humans switch between different tasks it takes our brains longer to shift gears. When we switch back and forth, we have to remember where we left off on the previous task, which wastes valuable time.  According to Daniel Goleman, author of “Focus”, it can take up to ten or fifteen minutes to regain our focus after an interruption or switch between tasks, making ‘multitasking’ the opposite of efficiency.

For example, if you’re working on a report for your boss and you have your email open in the background, every time you respond to the ding and check what’s new in your inbox, your brain stops the report ‘program’. After you deal with the email, your brain has to reboot the report ‘program’ – and you waste valuable time figuring out where you left off. In most cases, it would actually be faster and more efficient to shut off the email, work on the report without interruption, and then process the email all at one time.

More important than whether we save time or not, though, is the impact that multitasking has on our concentration, and therefore, on our quest for excellence. When we try to do more than one thing at a time, each task gets only part of our attention. We may think the amount of attention the second task requires is so negligible it doesn’t make any difference, but we’re kidding ourselves.

That negligible increment of attention makes all the difference in the world.

You can probably get by with partial attention. You may even be able to reach ‘good enough’. But you’ll never reach ‘great’ or ‘excellent’ by giving up increments of attention, because learning and performing our best requires complete focus and concentration. Results from brain research, Goleman says, show that “paying full attention seems to boost the mind’s processing speed, strengthen synaptic connections, and expand or create neural networks for what we are practicing.” When we devote less than 100% of our attention to learning something new or practicing a new skill, whether it’s because we’re trying to multitask or simply because our mind drifts to other things, the necessary brain rewiring doesn’t happen. Whatever we’re trying to learn doesn’t stick.

Looking back at my own multitasking examples, I can definitely see the negative impact. While I told myself that doing something as mundane as folding laundry wouldn’t hurt,  if I’m honest, there have been a lot of times I’ve been listening in on a class and I heard something important that I wanted to remember, but because I wasn’t taking notes, whatever those things were, they’re lost to me forever. And more than a few times I’ve had to ask someone on a conference call to repeat what they just said, because I wasn’t really paying attention – embarrassing!

As far as reading while I watch TV, I usually catch things on a superficial level, but if I want to remember and master the material, I have to go back and reread it. Maybe not the most efficient use of my time. Even sorting mail and paying bills while I’m watching the TV – which seems harmless because I don’t aspire to excellence in any of those activities – keeps me from fully relaxing, which in theory is the whole point of the Netflix binge in the first place.

Luckily, the solution to conquering this particular enemy of focus is pretty simple: just say NO to multitasking.

But, if multitasking is ingrained in your DNA, the first step is to become aware of when you’re tempted to multitask (or when you catch yourself doing it), and think carefully about the two things you’re trying to do at once. Ask yourself a few questions:

Then, once you’ve run through these questions, you can make a fully conscious decision about whether to multitask or not. And remember, the goal here is not to never, ever multitask again. We’re human, and there will be times when we choose to split our focus. The goal is to consciously weigh the pros and cons, and make an informed decision in each situation.

Personally, I still plan to sort my mail and pay my bills while I’m watching mindless TV – BUT, not when I want to relax and watch a show I really enjoy, like “This Is Us”. And from now on, I’ll be cutting out multitasking when I’m trying to learn something new, or when I’m working on any business-related projects.

But, but, but… what about that overwhelming to-do list? How do we find the time to get it all done without multitasking???

Stay tuned for my next post, where we’ll take a look at the amount of time we lose because of electronic distractions, and how we can reclaim some valuable chunks of time to do the things that are truly important to us!