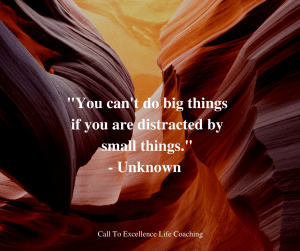 Recently I was thinking back on how much simpler life was when I was growing up, before the days of personal computers much less smart phones. Maybe I’m just at that stage in life where you start to get nostalgic about the way things used to be, but it seems like it was a lot easier to concentrate. I remember usually being able to get the important things done. And it wasn’t always that I had fewer responsibilities and less to do – at one point I was going to college full time, keeping up a 3.78 GPA while working 60 hours a week between two convenient stores. Plus I had an active social life and some really close friends.

Granted, my brain was younger and more agile, and I needed less sleep back in the day, but there’s another key difference: there were no distractions in the form of non-stop barrages of emails and texts and social media newsfeeds. It was a lot easier to focus.

Now to be fair, computers and the internet have made life better in many, many ways (anyone else remember typing a 25 page term paper and making corrections with White-Out?). But there are some drawbacks too, and the increase in distractions and mental clutter is one of the biggest.

In “Focus: The Hidden Driver of Excellence”, author Daniel Goleman says, “life immersed in digital distractions creates a near-constant cognitive overload.”(1) Among other things, brain overload can deplete our stores of self-control and willpower – have you ever noticed that you’re more likely to give in to temptation when you’re feeling drained and brain-dead?

Another area where being digitally distracted can have a huge impact is in our relationships. According to sociologist Erving Goffman, paying attention to our electronic devices while we’re with a live human being sends the person we’re with an “away” signal that tells them we’re not really interested in whatever they’re saying or doing.(1) He’s right. I’ve been on the receiving end of some of those “away” signals, and it’s not fun. I’ve sat through meals with people who spend the entire time checking their phone, all the while saying they’re listening. No, they’re not. And the main thing I start thinking about is how I can escape, because it’s obvious that whatever is going on in their virtual world is more interesting to them than the conversation in front of them. I’m sure I’m not the only one who has had this experience.

Don’t be one of those people. If one of your goals is excellence in your relationships, start by putting your smartphone away.

Digital multitasking (texting, emailing, or surfing the web, at the same time or while doing something else) also reduces our productivity and our ability to learn. A study by researchers Michael Smutko and Sara Broaders at Northwestern University found that students who took notes during class the old-fashioned way (pen and paper) got the highest grades, those who took notes on a laptop did slightly worse, and those who multitasked digitally during class had the lowest scores on average.(2) According to Broaders, “Doing two linguistic things at the same time is almost impossible. Reading websites or responding to emails, that linguistic usage cuts off any processing of the incoming lecture.”

Another study out of Stanford University showed that “People who are regularly bombarded with several streams of electronic information do not pay attention, control their memory or switch from one job to another as well as those who prefer to complete one task at a time.”(3) What was really fascinating about the results of this study was that the frequent media multitaskers did poorly on the tests even when they didn’t have any digital distractions – their brains’ ability to filter out other kinds of distractions and to learn new information or switch between tasks was lower all of the time compared with people who rarely juggle multiple digital inputs.

Now, it may be a chicken and egg question – do people who naturally have trouble concentrating gravitate toward juggling digital distractions? Or does electronic multitasking change their brains and make them less able to concentrate? Or maybe a combination of both?

In some ways it doesn’t matter – there’s plenty of scientific evidence to show that bouncing between texts and emails and social media newsfeeds and funny cat videos keeps us from performing our best. Focus is a critical component of excellence, and it’s essential if we want to be effective and achieve high-level goals. Whether you were born with a high or low ability to focus your attention, concentration is a skill we can all improve and develop further (we’ll look at some ways to do this in future posts). But the first step is cutting down on the digital distractions.

Strategies for Controlling the Digital Distractions in Your Life

Think about the activities you’re involved in throughout the day, and ask yourself which ones would benefit from your undivided attention. Then, turn off your electronics whenever you’re doing those tasks. You may even want to try restricting certain types of digital activities to certain times of the day – like no browsing the web or checking social media accounts or personal emails while you’re working. One thing I’ve tried is disabling my internet access while I’m writing (and I’ve heard other writers do this too), unless I need it for a specific piece of research.

However, if you’re one of those people for whom the very idea of being separated from your smartphone causes a spike in anxiety levels, you may need to wean yourself away slowly and gradually (remember the principles of kaizen!). Psychologist Larry Rosen suggests shutting off all electronics for a period of 15 minutes (set a timer), and when the time is up, allow yourself one minute for a technology check-in.(4) Repeat until you’re comfortable being detached from your devices for at least an hour.

Another suggestion from Rosen is to take a technology-free break every 90 minutes to allow your brain to slow down and recharge. This could be going for a walk, stretching, meditating, listening to music, or anything else that allows you to unplug from the digital world and relax.

Turn off Electronic Devices at Least 1 Hour Before Bed

Getting a good night’s sleep is essential for cementing what we’ve learned during the day and filtering out irrelevant information. Using LED devices that emit blue light, like phones and computer screens, can negatively impact our ability to sleep. Recommendations from the National Sleep Foundation suggest turning off electronic devices at least an hour before you go to sleep, while the Mayo Foundation recommends using a dimming screen at night, and keeping electronic devices out of the bedroom.(4)

Make Technology Work for You, Instead of Against You

Use tools, like the automated sorting function in your email program, to send low priority or non-urgent messages (like newsletters or marketing ads) to special folders where you can process them in batches at a more convenient time. One woman I know created several different email accounts for different uses (like signing up for newsletters or shopping online); that way, there’s never any junk in her main work/personal account, she can process those emails quickly, and she checks the other accounts when she has the time and interest.

If you find yourself regularly flipping between multiple news sources or blogs, technology expert Alexandra Samuel suggests using an app like feedly, Flipboard, or Reeder, to gather relevant information in one place; you can then block out time daily or weekly to review your collection.(4) And if you need to post things to multiple social media sites regularly, try using apps like Hootsuite, Buffer, or Social Inbox to automate the process.

Don’t worry – the goal here is not to banish digital devices from our lives altogether and live an Amish lifestyle. The point is to control them and keep them in their place, rather than being controlled and letting electronic distractions keep us from learning and performing our best. Just like with other forms of multitasking which we discussed in a recent post, start by simply becoming aware of when and where you multitask digitally, and honestly evaluate the impact. Then try one or two of the strategies above, and see what works for you. And if you’ve found any other tricks that work, share them in the comments section.