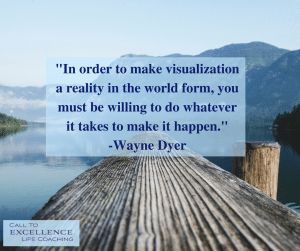 I remember the first time I heard about visualization. I was in college, and I had stumbled upon the book “Creative Visualization” by Shakti Gawain. I read and reread that book cover to cover. It seemed to provide an easy solution to all of the problems in my life. Simply visualize myself living the life I wanted, having all of the things my heart desired and achieving everything I aspired to accomplish. And then – like magic if I did it correctly – my life would be transformed.

Apparently I didn’t do it right, because I’m still waiting for the ponies and rainbows and leprechauns with overflowing pots of gold to show up …

It wasn’t for lack of trying. I tried really, really hard. I snapped up the many books that have since come out, all variations on the same theme, searching for the secrets of this technique.  I got really good at vividly “seeing” what I wanted, and experiencing it with all five senses, just like the books said.

I figured it was because I had some major subconscious blocks, or maybe my energy vibrations were off, or my chakras were clogged… something mysterious had to be going on, because visualization just wasn’t working for me the way it was supposed to.

At least, that’s what I thought…

The Science Behind Visualization

Not long ago I stumbled onto a reference to a set of scientific studies evaluating different visualization strategies… and the proverbial light bulb went on. Not only was I visualizing the wrong thing, but the way I was going about visualization may actually have been sabotaging my chances of success.

First, in a series of studies, researchers divided a class of college students into three groups, one of which was instructed to visualize their desired outcome (e.g., getting an “A” on an exam), the second group was told to visualize the process needed to achieve the goal (e.g., study sessions, spending time in the library, etc…), and the third ‘control’ group didn’t do any visualization. Perhaps it’s not surprising, but the group that visualized the process performed the best, studied the most, and achieved higher grades than the other two groups. But here’s the real shocker: the group of students who visualized themselves getting good grades performed the worst across the board. Students who didn’t visualize at all were better off. (1)

But, that’s just one set of studies, right? And it makes no sense, right?

Well, actually, there have been other studies that show the same thing (2-5), and they start to explain the reason for this bizarre and unexpected outcome. It all has to do with how the brain operates. You see, our brains can’t really tell the difference between a ‘real’ experience and something we vividly imagine – an intense fantasy will trigger the same physiologic reactions as if we experienced the same thing in real life (this is why your heart is racing and you’re dripping with sweat when you wake up from a nightmare).

This is the argument for how creative visualization is supposed to work – your subconscious comes to believe that whatever you are visualizing is real, and is therefore compelled to create the equivalent experience in the 3D physical world.

Sounds logical. Except for one thing – your brain already got its payoff during the visualization session, and that actually decreases the motivation and energy to take the actions necessary to pursue the idealized future we visualized in the real world.

A series of studies by psychologists Heather Barry Kappes and Gabriele Oettingen showed that positive fantasies (i.e., visualizing an idealized future event) were associated with lower energy, measured by physiological and behavioral changes, compared with questioning, negative, or neutral fantasies. The kicker is that the positive images lowered energy the most when they were associated with a more important, compared with a less important, need. (6)

Basically, the more you want or need a result to happen, the more visualizing it sucks away the energy and motivation needed to make it happen. Further, seeing the ‘goal’ as if it has already been achieved can trick your brain into thinking you don’t need to invest effort to make it happen, or that there won’t be obstacles along the way. You go into relaxation mode when you need to be in work mode.

So does this mean we should do away with visualization altogether? Not necessarily.

Let’s go back to that first set of studies with the college students. The group that visualized the ‘process’ outperformed all the rest of the students. And that may be the key.

Let’s look at another setting where visualization is used with great success – the world of sports and athletics. In his book “In Pursuit of Excellence”, sports psychologist and performance expert Terry Orlick devotes an entire chapter to positive imagery, and notes that Olympic athletes and world champions typically spend at least 15 minutes a day on mental imagery. (7) Further, most high achievers in a variety of professions – fighter pilots, surgeons, performers, business executives – incorporate some type of positive mental imagery exercises into their routines, particularly before a performance or event.

The key here is what they spend their time visualizing, and it’s usually not the end result. While the Olympic athlete probably has a vision of themselves standing on the podium receiving their medal in their mind to keep themselves going through years of grueling training, in their imaging sessions they are focused on mastering and executing the movements or skills they need to reach that end goal. They imagine themselves handling distractions or overcoming expected obstacles. Once again, it’s the process.

So what does this mean for the rest of us?

If you’ve tried visualization but haven’t experienced the results you desire, try it again, but shift your focus from the imagining the end result to seeing yourself performing the actions you need to take to get there. Ask yourself who you need to be, and what you’ll need to do, to achieve that result. If your dream is to start your own business, see yourself performing the steps and doing the tasks that are involved in running a successful business. If your goal is to lose weight, visualize yourself enjoying eating healthy foods and going to the gym. If you want to write a book, imagine yourself sitting at the computer every day and writing.

As for visualizing the end result, it’s good to have a clear picture of what you’re trying to accomplish, and seeing yourself as capable of achieving it. All high achievers start with a vision of what they want – it guides their steps and keeps them motivated when the going gets tough. Just don’t let that vision slide into daydreaming and fantasizing. Use it as a touchstone, but focus your mental energy on the actions you need to take to turn it into a reality.

What kind of experiences have you had with visualization? What have you learned? What’s worked and what hasn’t?